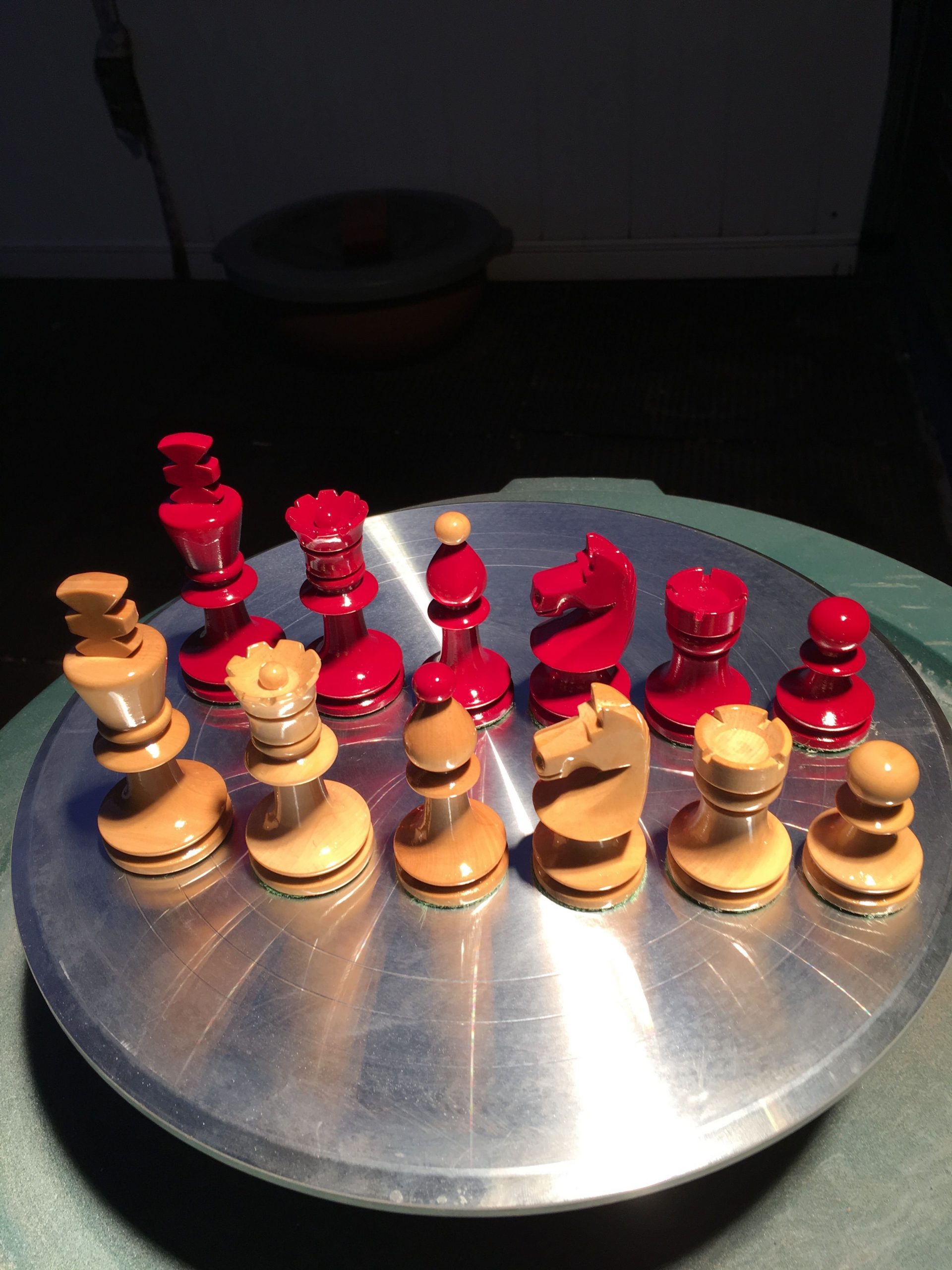 There’s a new excitement or rather a confusion among chess enthusiasts on whether one should go for a buff polished chess set or lacquer chess set.

But many of us actually didn’t know what a buff or lacquer chess set is?

There’s a long post on chess.com regarding this and every one has their own opinion on this. It’s quite difficult to tell and make the decision on to whether to get a lacquer or matte finish chess set. Let find out in detail the difference along with the pictures.

But first, let’s discuss why and who bought this concept of lacquer/buff polish chess set?

I’m following chess industry since 2013, though I joined chess.com in the year 2016. Some of the chess businesses where my frequent visits are CB, HOS, thechessstore, thechesspiece and chessUSA, and have collected around 20+ chess sets till then, with the majority of them from chessbazaar, HOS and eBay auctions.

In a one-sentence definition, the buff polish is a semi-gloss or silky matte type finish whereas lacquer is a high-gloss finish.

If I’m not wrong, it was in the year 2016 when chessbazaar started the concept of giving the option of lacquered or buff(matte) polish chess set.

It started with the problem of oxidation. The oxidation of the padauk wood. It’s a white dust that comes from nowhere and builds up in most of the pieces. If you are a chess collector or posses a padauk set, you might have faced the oxidation problem. If you haven’t encountered this issue with your Padauk set, it is because the wood log used in your set is seasoned. (Chessbazaar advertise Padauk as Bud Rosewood, HoS advertise as Blood Rosewood)

Padauk is not an Indian wood. It’s origin is from African or other sub-tropical countries like Sri Lanka. It has a lot of moisture in it. When the Padauk log reaches Amritsar in India (chess manufacturing hub in the world), it reacts to the local dry atmosphere. Amritsar is situated in Northern part of India, very dry & very warm in summers (goes up to 115 F/46 C) and very cold in winters (32 F/0 C).

Richard Walt did some research with his chess pieces and have applied lacquer to his Padauk chess pieces, which mainly solved the problem.

Which final finish should you choose?

From my personal experience, if you’re buying a Padauk chess set; it’s a must.

The set looks absolutely stunning with high gloss finish specially if you’re planning to keep it as a décor as well. The biggest drawback of the high gloss finish is that it may cause a distraction in focusing on the game.

The below image shows the difference between a gloss and buff polish finish.

Disclaimer: Thanks to chessbazaar for providing me with the pictures.

I have also interviewed chessbazaar and here are the QA.

CB : We started the lacquer process in 2016. The main purpose is that some of our customers want a glossy finish rather than a simple matte. The other issue is with the oxidation of Bud Rosewood. It resolves that.

CB : We use clear lacquer for the glossy finish. We have a proper machines and material to do this process.

CB : Preferences are subjective. Mostly it depends on the liking of a person. Some like glossy and some matte, even on Bud rosewood sets.

CB: It’s in process. We will upload it on our YouTube channel as soon as we will able to create it.

CB: There can be many reasons. We tied up with a research institute in India and they are still researching on this issue. We, however, highly recommend our customers to get a lacquer as a finish when buying a Bud Rosewood(Padauk) sets.

Matte finish is actually a semi-glossy finish, which is done by rubbing the chess pieces on a high moving buff wheel. They apply luster and Coccus lacca polish(an organic polish) to make the sets beautiful.

If you’re buying a Padauk set, the lacquer is a must, you can also go for lacquer polish on Ebonized pieces since the natural shine may go by the passage of time. For ebony or other natural woods other than Padauk, matte polish will be a more natural choice.