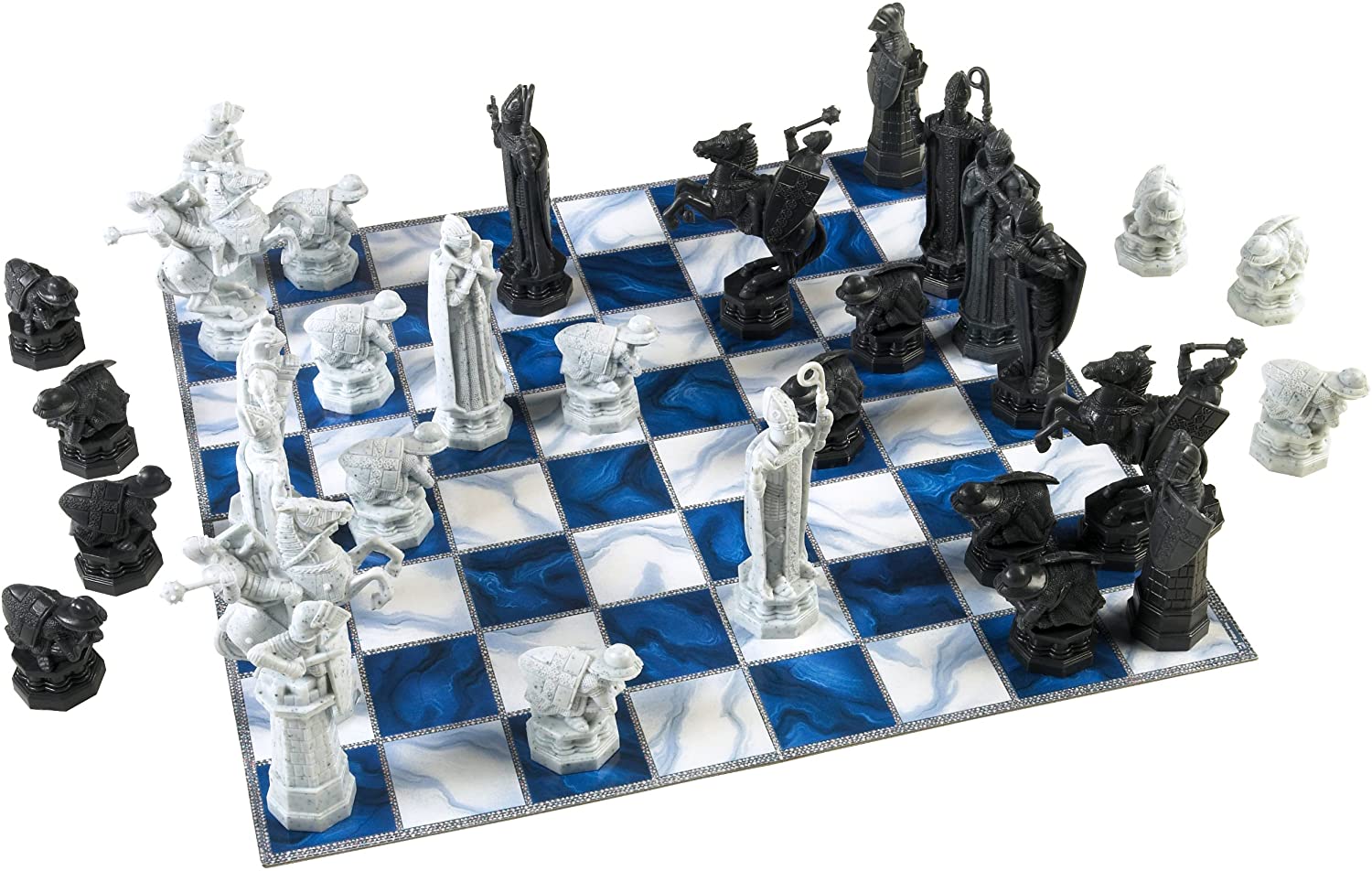 “Express Your Love for Harry Potter and chess simultaneously”

How fascinating to watch Harry Potter Series? Or, do you prefer to read Harry Potter Books? By any means- It is adventurous to be a Potterhead. So, all the Potterheads who love to play chess as well. We have a surprise.

We introduce to you Harry Potter-themed Chess Set. If you would like to get the real wizard experience, then this is the most recommended purchase. This
investment completely makes sense for a chess lover and a Harry Potter fan. After all, you must be aware of how popular is the chess world just like the wizarding world!

You could be looking for fancy chess set for yourself, your kids, or even grand kids. This Harry Potter chess set works fine for every age group. In this blog, we will be discussing the features of all of the recommended options. So, read and analyze before checking products at Amazon. 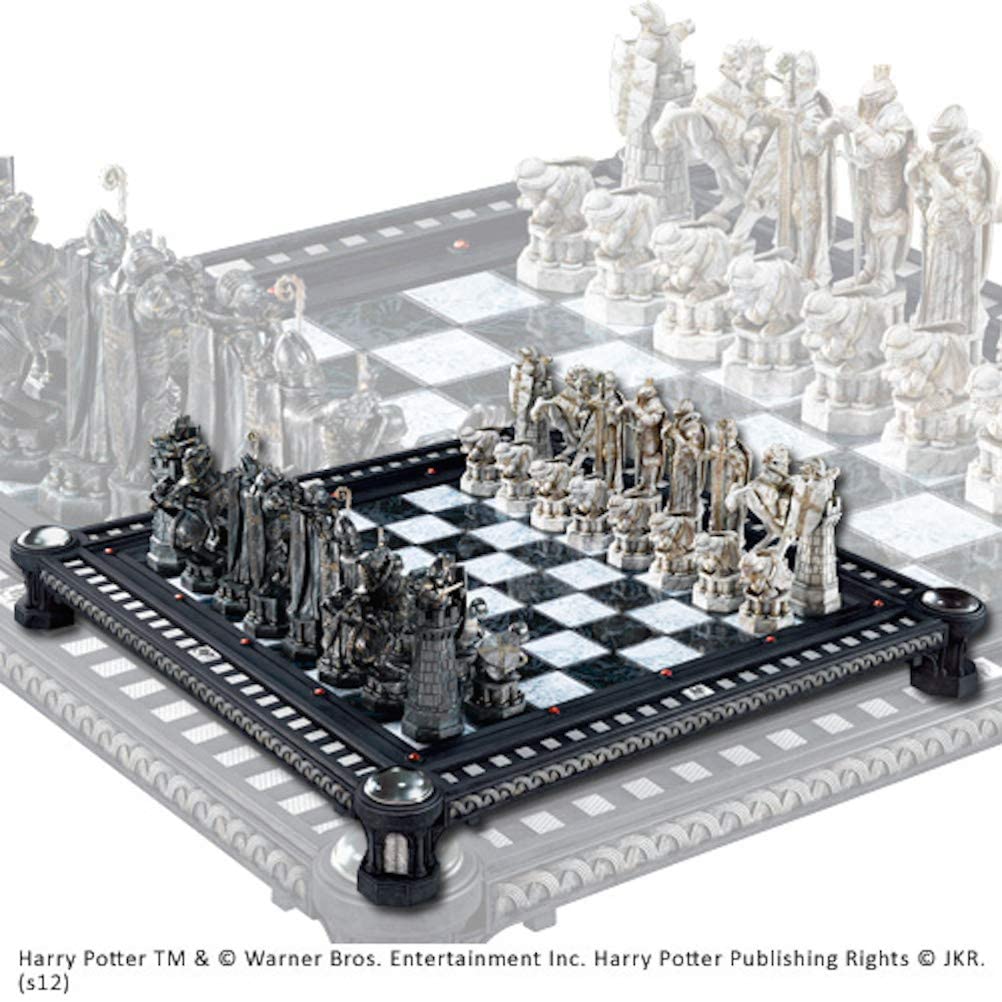 How about a recreation that is remarkable and comes with a striking board for playing? Sounds like a happening plan? Let us add adventure. This is the replica of the chess set seen in the Harry Potter and the Sorcerer’s Stone movie.

We know you cannot wait to know more. These 32 pieces of chess have all the detailing and measurement as shown in the movie. These are 2 ½ to 5 ½ inches in height and gives an immense feeling to the player. This is just appropriate for the 20 x 20 inches chessboard.

The Noble Collection created this Harry Potter chess set under the authorization of Warner Brothers. It is recommended to teenagers of 15-19 years but can be enjoyed all age groups. The best part is this fancy weighted set is a mere 26.4 pounds in weight, which is suitable for storage as well as playing.

What’s your take on this amazing chess set with the fame of Harry Potter? Check it out on Amazon for in-depth product detail. 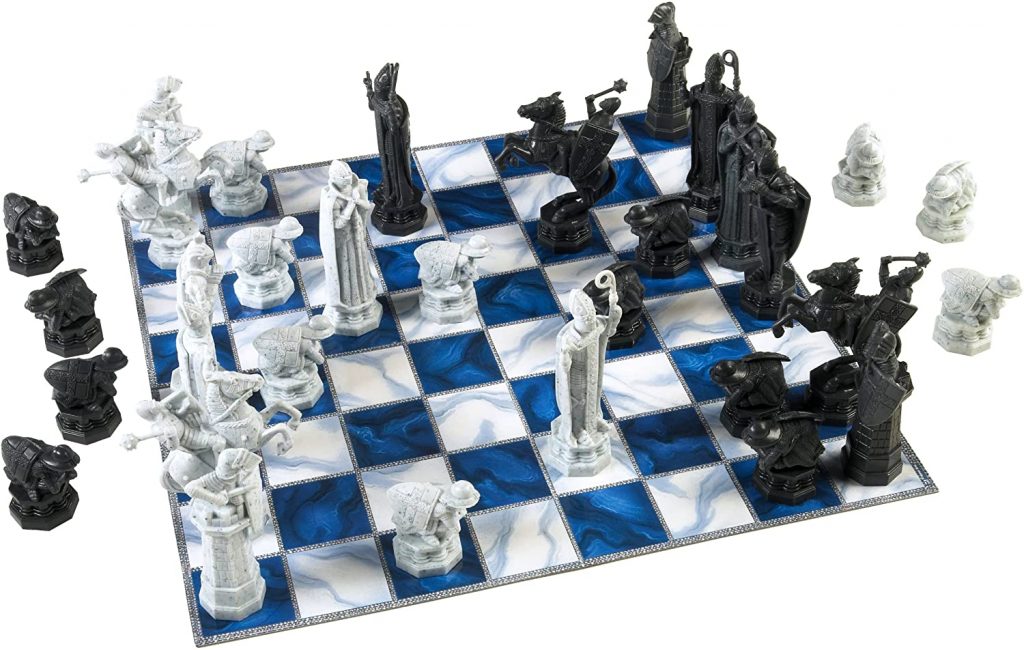 Why let chess a game without magic when it can have a twist? Yes, we are asking you to think out the box with the classic chess game with the addition of the Harry Potter theme. This is offered by Mattel on Amazon.

This Harry Potter chess set is inspired by the movie- Harry Potter and the Sorcerer’s stone. It’s all pieces are detailed miniatures that are replicated exactly like figures in the film. All look simply fabulous and detailing is the real show of craftsmanship. You just cannot take your eyes off.

It has 32 pieces just like any chess but the shapes are highly appreciable and unique. This set comes with a fold-out board that carries chessmen very well. You never have to worry about the usage and handling as it has an easy to use instruction guide in the box.

This 2.25 pounds weighted chess set is 10.5 x 2.5 x 10.5 inches in dimensions. This is must-have chess set for Potterheads that comes with commendable quality and affordability. What do you think about this collection? PS- It has a great rating on Amazon by chess lovers and Potter enthusiasts. 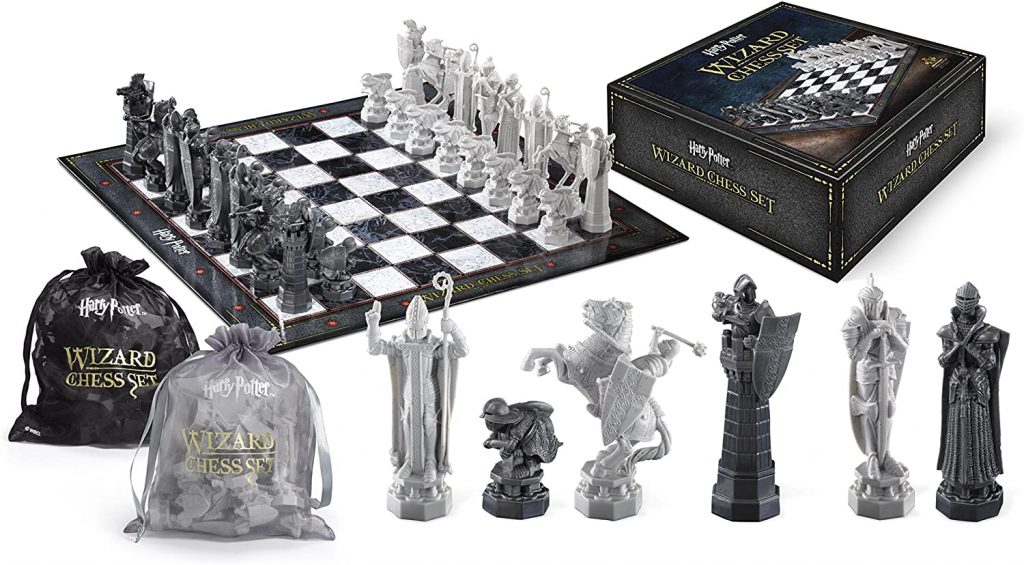 This is an official Warner Brothers’ authorized product alert! This is one of the most intriguing masterpieces crafted by The Noble Collection Store. A beautiful recreation of the designer chess set from the Harry Potter and Sorcerer’s Stone movie.

Black and Silvered colored chess set come with a playing board of 18.5 x 18.5” inches. Each chessman is about 2 to 4 inches in height to fit well on the square of this elegant chessboard. It is a great chess set for teenagers and other Harry Potter fans.

These well-detailed chess pieces will welcome you to the world of the wizard. You can have the ultimate experience with these miniatures of your favorite figures from the Harry Potter series. The best part is- this is a licensed Harry Potter chess set.

This is why the Nobel Collection Store is recognized as the manufacturer of exclusive stuff that represents artistry, and craftsmanship like no other company. Their craftsmen are dedicated and creative & are always in the quest for perfection to produce such fine quality sets.

Chess has a prominent role in the Wizard world. All thanks to Harry Potter movies, and books. From Percy Weasley to Ron Weasley- all the characters were seen playing chess of Wizards. They showcase an intriguing merge of chess and magic with the enchanted responses.

Yes, being a Potterhead and chess lover- you must have noticed that chessmen move as per the commands of the players without any force. Harry was defeated in Chess by Ron Weasley various times.

No wonder, why this is a great game in the muggle world. In the Harry Potter world- this game was not just an activity. Instead, it was deadly and full of surprises. After all, nothing is ordinary at Hogwarts- Then, how can be their chess game?

If you need such a game then technology can make it possible with the smartphone connections and Bluetooth connected chess set. In this, magnets and motors are installed inside the board and this makes the pieces move with the voice of the player. Gives a magical feel at first! However, you cannot expect the chess pieces to move with your commands for real 🙂

We try hard to save your time and money for any purchase concerned with chess sets and individual boards. This time we thought of offering something out of the box and come up with the beautiful Harry Potter chess set.

All the suggested options are from top suppliers and are available at Amazon. What else could a significant reason place an order right away for these worthy options? Go grab it.