Store Name: The Chess Store, Inc
Store Description: The Chess Store is an American chess retailer based in Hillsboro, Oregon. They began in 1999 and have served the chess-playing public in the U.S.A. and the world with a wide array of chess products. Chess players are sure to find their needs at The Chess Store, from sets to accessories.
Price Range: Low-End, Middle Range, High-End
Customer Care Email: customerservice@thechessstore.com
Support Phone No.: 503-352-0174 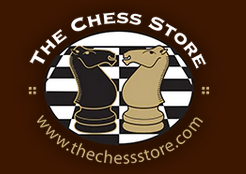 The Chess Store has impressive product variety and great selection of items, from sets to accessories. Almost all well-loved chess brands are on their shelf.

They have high product-quality and their prices are generally fair in relation to other American retailers. Among them, specifically, they offer the lowest prices in individual or small-quantity purchases.

Purchasing from them is a breeze. They have a dedicated customer care emails for swift response. The range of chess equipment with The Chess Store is amazing. They have an impressive website and shopping with them is fun and easy.

We believe The Chess Store will impress anyone looking for anything and everything chess. It is just about one of the most, if not the most complete store you can find online.

Chess sets (wooden or plastic), boards, clocks, bags, score sheets, books, DVD’s, decors and themed sets, storage boxes or coffers – name it and they have it.

You only need to take a long look at the store and you will know that for each of your needs they have many competing brands to choose from. Here they are:

As for their wooden pieces, supposedly the flagship products of every store as these are the most popular, The Chess Store has them, too, in wide variety. Pieces come in King sizes from 2.75 to 4.25 inches, in different woods, and in regular tournament or collectible variety.

While some stores cater primarily to a particular group of chess players, collectors for instance, we feel that The Chess Store reaches out to just about all types of shoppers with their different needs and tastes.

What’s more, they seem to have items that cannot be found elsewhere, such as their beautiful plastic sets. This suggests that they are not just content to retail what are generally provided by wholesalers, but take care to develop products chess players will appreciate.

Those needing a complete line of products – from sets, boards, clocks, bags and score sheets – such as clubs and schools, will love this store and will not have to look elsewhere.

For Product Variety, we give The Chess Store 4.0 stars
 4/5

Customers will generally be satisfied with the product quality of The Chess Store. Their wooden chess sets come from India, by their own admission, and we all know India speaks to the quality of its sets.

Their plastic sets are the typical ones we see in tournaments (which we know come from China), except that they have special ones we haven’t found offered elsewhere, as previously mentioned. We refer to the Guardian Set, the Pro Tourney and the Zukertort Set. We have these sets and we could attest that they are beautiful and heavily weighted, several notches better than the common, tournament variety.

As for product pricing, we compared The Chess Store with their closest competitors, and we count Wholesale Chess, The Chess House, and the House of Staunton among these.

They are all American chess retailers likely having the majority of their customers within the mainland U.S.A., and Canada. Sure they all serve worldwide, but we believe their buyers are close to home, given the tremendously high shipping costs.

Thus, our findings would most likely benefit the North American shoppers, although it would benefit others from around the globe, too, if they are bent on purchasing from these American retail stores for one reason or another.

We found out that The Chess Store is right there in the pack, running neck to neck with these competitors as far as product prices are concerned. This is probably only natural, as they likely obtain their stocks from the same source – China – as we have mentioned.

We see a general trend here – The Chess Store often has the best prices when it comes to individual or small quantity purchases.

When it comes to bulk purchases, as schools and clubs often make, there are better prices elsewhere. It may not be true for every product but this is often the case.

We suggest to our readers, therefore, never to hurry on a purchase. Consider your item and the number of it that you need, and be sure to knock on the doors of the retailers we mentioned.

If you are purchasing for yourself or someone, or if your purchases are generally of small quantity, we can recommend The Chess Store.

As for wooden sets, we tried to answer the question everyone should ask – “If American retailers source their sets from India, would there be a substantial difference, price-wise, if I acquire my sets direct from Indian sellers?”

We found the answer to be a resounding “Yes,” which will also be best explained by direct comparison.

This all goes to show one conclusion – American retailers’ prices for wooden sets are well within each other’s, but given their profit margin and the costs for transporting their sets from India to the mainland U.S., they simply cannot match the prices of the direct Indian sellers.

But when we talked about the quality and an eye for perfection, The Chess Store scores better than their Indian counterparts.

For Quality and Price, we give The Chess Store 4 stars
 4/5

We Recommend/Not Recommend you if

We’d like to share that when we purchased the plastic sets The Chess Store sells exclusively, the transaction was very smooth.

We noted, however, that some pre-sales questions we asked were answered by a mere “yes” or “no,” which left us feeling that we were dealing with a very distant seller who only wanted to complete a business transaction.

Other sellers do not lack for warmth and friendliness. And as if to affirm their quiet and reserved nature, there seems nothing to know about them. Their introduction of themselves in their site is short, and they do not drum-beat their successes in their twenty years in the chess-retailing industry.

Of course, we had to verify our experiences with those of others, and as we scoured the net for reviews we found out that some customers have had problems with The Chess Store’s customer services. One shared that his set lacked eight black pawns, and another that he received an entirely wrong order.

We do not mean, of course, that The Chess Store lacks satisfied customers. Many are also very happy with their purchases. Like every store, we are sure The Chess Store strives to get every transaction right and leave their buyers contented. We are sure they are working on this, as a highly satisfactory customer service seems to be the only badge they lack to become a top-notch online retailer, and we are bound to see improvements in the future.

We will leave by saying that if you purchase from the Chess Store your transaction will likely be as seamless as ours.

For Customer Service, we give The Chess Store 3.8 stars
 3.8/5 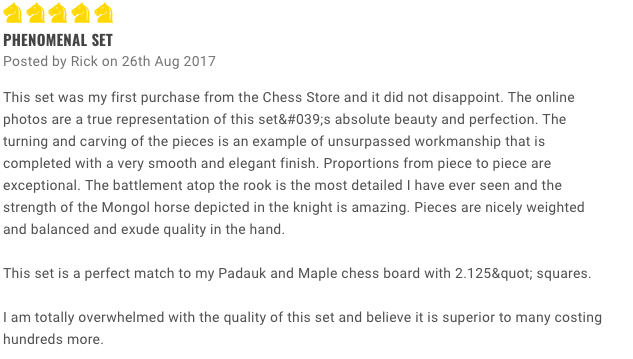 We cannot help but be impressed by The Chess Store’s website. The products are all systematically categorized that shopping becomes a breeze. You can shop for wooden sets by King-size, by wood make, or by model.

Still, we found some shortcomings. The first of these is that the site does not have a live chat where queries could be addressed quickly. Customers love attention, especially if something toggles at them before a purchase. The second is that the site does not have a function that allows you to estimate quickly your shipping expenses. We simulated an order and found out that we had to give so much information and fill in several pages before we were given an estimate of our shipping costs. It could happen, therefore, that you could be nearly through with an order, but you’d have to back out after learning of your shipping costs.

All in all, however, The Chess Store website is great.

For Shopping Experience, we give TheChessStore 4.1 stars
 4.1/5

This company is among the oldest company dealing in chess equipment.

The company runs the store on eBay and Amazon besides their own website.

They have 100s of reviews on many products on their website which makes it a legit business.

You don’t need to register your email to make a purchase. However, to get 10% discount, loyalty program and many other benefits you need to sign-up with The Chess Store.

Can I track my order after the purchase?

Yes, you can track your order once The Chess Store ships the item/s.

The Chess Store uses FedEx and USPS for expedited shipping, both domestic and International.

Do they ship outside US?

Yes, they offer worldwide shipping, however you need to place a special request with them. The International shipping is not free, obviously.

Do they offer Gift Cards?

Yes, they offer Gift Cards also known as Gift Certificates. You can purchase it from them and can gift it to any of your loved ones. Once purchased, these are non refundable.